Blog - Latest News
You are here: Home1 / Life2 / Flying in the EU during the pandemic

Flying within the European Union is normally frictionless, reliable and very affordable. You don’t even need a passport. That changed in 2020 shortly after the initial European COVID-19 hot spot was identified in Lombardy, in Italy’s north.

As the scale of the pandemic grew, on March 10 Spain closed itself to all flights from Italy. That’s how I found myself stranded in Sicily. Almost four months later, when flights finally resumed, I was keen to get back to Spain. This is what it was like – to fly from Palermo to Barcelona in early July 2020.

It’s mandatory to wear a mask while inside EU air terminals. Nobody seemed troubled by this. It’s what we had all been doing throughout our lockdown whenever entering any shop or public transport or building.

After check-in all passengers needed to pass by a temperature scanner before security. Hand sanitizer dispensers were located close to wherever people need to touch things, such as when you’ve had to use the hand luggage trays when passing through security.  In the departure lounge, every second seat was taped-off as a social distancing measure. This was not a problem since there were far fewer people looking for a seat than normal.

Boarding happened row by row.  Passengers were asked not to queue but instead to only approach the air-bridge entrance when their row was called. The seats at the rear boarded first, filling the plane from the back to the front. This worked well.

Italy has recently banned the use of cabin overhead lockers for all incoming and outgoing flights. The only hand luggage passengers can take on board is what can fit under the seat in front. The idea is to reduce the amount of close contact passengers have with each other while boarding. While aircraft HEPA (high efficiency particulate air) filters are very effective, they don’t prevent exposure to seated passengers near others exhaling above them while struggling with the overhead bins.

On both sides of the aisle, the middle seats were empty.

Everyone had to be wearing their mask and keep it on for the entire flight. There was no in-flight catering. Nobody complained. I suspect that like me, every one of the passengers was simply happy to finally be able to get to where they wanted to go.

When we landed, disembarking was the reverse of boarding.

Everyone had to remain seated until their row was called, so there was none of the usual nonsense of people standing-up, retrieving luggage from the overhead bins, and then waiting uncomfortably for the air-bridge to connect. This meant we all got off very smoothly and quickly. Maybe airlines should adopt this approach permanently, even after the pandemic…

The other big improvement was at the baggage carousels. Now, instead of having people surround the conveyor belts and block the view for everyone else, there is the need to social distance. All around the baggage carousels are little “feet” markers, each 1.5 metres apart, serving as positioning guides. This has the welcome effect that everyone can now see the conveyor and their luggage as it appears, so you only need to step in when you spot one of your belongings.

Overall, the flights(s) were surprisingly pleasant. My first ever on Alitalia and I couldn’t fault them.

I should mention the uncertainties of planning the trip. Initially, we’d booked a direct flight from Palermo to Barcelona via Vueling. (Vueling is the Spanish equivalent of Australia’s Jetstar – i.e. a lower-cost airline). When we booked a month before, they assured us we could book with confidence because if necessary, we could change the flight at no cost. What they didn’t tell us was that Vueling themselves might cancel the flight, with no alternative available until 3 weeks after our scheduled date, and that in such an event, they would keep our money and offer only “credits” towards some future flight.

By the time Vueling told us our flight had been cancelled, we were committed to flying on the date of our ticket.  We had given notice to leave our Sicily digs and already arranged new accommodation in Barcelona, so we needed to find another airline. We couldn’t find any direct flights, but found that with Alitalia we could fly to Barcelona via Rome with an overnight stop. (In normal times an overnight stop in Rome would be considered a bonus, but these are not normal times. We stayed at the airport). The revised trip cost a lot more than the one originally planned, and we still have no idea if we will ever get a refund from Vueling for our cancelled flight.

Everyone knows that COVID-19 has introduced a host of uncertainties when it comes to travel. Will you have to go into quarantine? Where? For how long? What if you get sick? What about coming back? etc. But on top of that, discovering that your airline may cancel your flight at short notice only adds one more layer of uncertainty to the entire process. In fact, it is probably a deal-breaker for many…

I appreciate that the airlines are having a very tough time with this pandemic, but airline behaviour such as Vueling’s – of “trust us” but then not refunding fares when they cancel flights, is not a recipe for consumer confidence. I suspect that the only people who are going to fly internationally in the next six months are those that absolutely have to.

If you want a holiday, it’s more sensible and far safer, easier and cheaper to simply explore your own part of the world. Perhaps take the car or a train… Ian Allen 2020 Cefalù under the lockdown 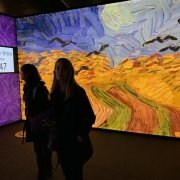 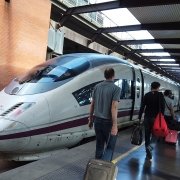 Ian Allen 2019 Riding the AVE from Madrid to Barcelona 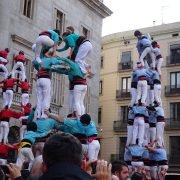 Cefalù under the lockdown